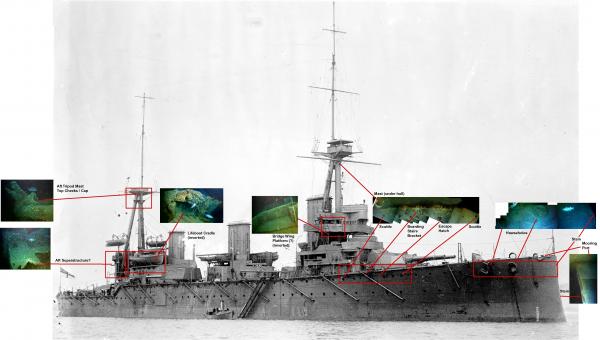 On 12 April 1924, the former HMAS Australia, the largest warship in the Australian fleet was towed 50km east of Sydney Heads and scuttled with full military honours.  It was a solemn occasion filled with emotion.

Eulogies were read, strong naval men were wet eyed and public outrage flared at the loss of the first flagship of the Royal Australian Navy (RAN). After a 21 gun salute, the scuttle-cocks were opened and charges were used to blow holes in the side of the hull.   With wreaths laid on her decks and the naval ensign still flying, HMAS Australia, the vessel which had prevented German aggression in the South Pacific during World War 1, capsized and began to fill with water.  As the vessel sank, so ended a golden era for the RAN.

The Indefatigable Class battlecruiser HMAS Australia was the first flagship of the Royal Australian Navy.  Built in Clydebank (Glasgow) Scotland, the vessel was commissioned and paid for by the Australian Government to ensure adequate protection for the Australasian Pacific region.  At 179m long and a displacement of 18, 500 tons, the vessel dwarfed all other Australian warships.  With 900 officers and crew, it carried four sets of paired 12 inch breech loading guns, which were capable of launching a projectile over 25km.  The vessel was armour plated and equipped with side firing torpedos and fourteen 4 inch quick firing guns for surface and air contacts.

Upon reaching Australia in July, 1913, HMAS Australia was greeted by rapturous crowds.  This imposing vessel was a symbol of national pride, as it represented Australia’s coming of age.  For the first time the country possessed its own independent effective naval force and no longer relied on British warships to protect it.  The warship also demonstrated a significant departure from the previous policies of using localised coastal defences of coastal gun batteries and naval forces, as Australia could now bring the war to the enemy’s doorstep.

HMAS Australia served initially in the Western Pacific. It was involved in the capturing of the German occupied territories of New Britain and New Guinea.  Most significantly, as the largest warship based in the area, its presence effectively drove the Imperial German Fleet from the Western Pacific where they were annihilated at the Falkland Islands by the Royal Navy.  HMAS Australia captured and later sank the German supply liner Eleonora Woermann in 1915.  Having freed the Pacific region of the threat of German invasion, HMAS Australia was transferred to Rosyth, Scotland.

HMAS Australia undertook regular patrols in the North Sea to deter potential German invasions.   During this time she was involved in two accidents during patrols.  The vessel collided with her sister battlecruiser HMS New Zealand during thick fog, and was so extensively damaged that she was put out of action for the Battle of Jutland in late May.

In February 1918, 1 officer and 11 crew members from the HMAS Australia volunteered to take part in a commando raid on the ports of Ostend and Zeebrugge, which led to the Australians being awarded several commendation medals.

HMAS Australia being towed to the scuttling site off Sydney in 1924, showing amidships funnel partially dismantled on the deck (Photo: Carl Veen Collection)

During the war, experiments were undertaken with mounting aircraft on her turrets, including Sopwith Strutter 1 ½ type.   A Sopwith Camel was also later mounted.  The success of these trials led to the widespread use of these aircraft throughout the British fleet.

With the signing of the Armistice on 11 November 1918 after the German surrender, HMAS Australia was given the honour of leading the port line at the Head of the Squadron escorting the interned German Fleet into Scapa Flow, Scotland, an honour that was granted in recognition of Australian efforts during the Great War.  The HMAS Australia returned home in 1919 where she received a rapturous welcome in every port.

With the cessation of hostilities and rapid advancements in post war naval ship design, HMAS Australia was deemed to be redundant, and the cruiser HMAS Melbourne took her place as the Fleet’s flagship.  After a tour of the country, the vessel was transferred to Westernport, Victoria where she acted as a naval gunnery and training school, as well as a fixed coastal battery.

In the meantime, politicians and naval officers debated her future.  Several proposals to recycle the vessel were made, including her use as a coastal breakwater, accommodation for the unemployed, an RAN hospital ship, a war memorial, or a floating war museum. Her fate was finally sealed under the terms of the Washington Treaty of 1922, which was designed to limit the spread of a naval arms race in the Pacific region.  The British agreed to decommission this vessel to limit the number of warships in the region under their allegiance.

The sinking of the vessel was received by the Australian public and Royal Australian Navy with dismay.  Wreaths were laid on the vessel and sermons held to commemorate her loss.

Prior to her scuttling, the vessel was stripped of all valuable material and many features were removed as souvenirs for local councils and museums.  The vessel was scuttled with full military honours in the presence of the Prime Minister, senior Rear Admirals from the Australian and British Navies, along with several cruisers from the Royal Navy.  The ship that was once the pride of the Australian Navy slipped beneath the waves within 15 minutes with the white ensign still flying from the stern.

The wreck of the former HMAS Australia was accidentally discovered by Fugro Seafloor Surveys Inc. during a telecommunications survey in 1990.  A direct inspection of the wreck site could not be undertaken as it lay beyond the depth of commercial diving limits (400m).  An opportunity arose in 2007, when the Royal Australian Navy engaged the US Navy deep water robotic vessel (ROV) CURV 21 to search for a downed Blackhawk helicopter in Fiji.  On the return to Australia, the MV Seahorse Standard deployed the ROV to undertake the first photographic inspection of the wreck site at the request of the Heritage Branch.

The wreck was found lying substantially intact but upside down resting on its superstructure, surrounded by a wide field of debris which fell off the vessel as it sank.  Ten hours of video footage were recorded, which detailed the extent and condition of the various features of the site.  Interpretation of the site revealed that the vessel rolled over and sank by the stern.  The forward and aft masts of the control towers snapped off when the wreck hit the sloping seabed and the vessel slid approximately 400m down the slope before coming to rest diagonally across the slope.

Schematic of the sinking processes of the HMAS Australia 1) Ship on surface. 2) Ship capsizes to port - gun turrets fall out. 3) Vessel sinks by stern. 4) Vessel begins to level out as it sinks. 5. Vessel hits seabed on aft tripod tower – mast breaks off and stern is bent on impact. The vessel then strikes on forward mast, which also breaks off and is driven forward under hull near bow.  Turrets strike seabed. 6) Vessel slides approx 400m down slope and turrets slide near/past vessel (Image: Brad Duncan)

The HMAS Australia site is protected as an Historic Shipwreck under the Commonwealth Underwater Cultural Heritage Act 2018. Because of the extreme depth, the wreck is far in excess of recreational diving limits.  The site is managed by the Heritage NSW, Department of Premier and Cabinet.