We protect and manage historical archaeology. By using physical evidence in conjunction with historical sources, we can learn about our past.

What is historical archaeology?

Historical archaeology is the study of the past using physical evidence in conjunction with historical sources. It focuses on the objects used by people in the past and the places where they lived and worked. It can tell us about the way things were made and used and how people lived their daily lives.

In Australia historical archaeologists investigate sites and relics such as those left by early Asian fishing fleets and Dutch explorers, as well as the settlements of Europeans, Chinese and other cultural groups.

What are historical archaeological sites?

Archaeologists study many types of physical evidence, including:

Archaeology is not just about objects and remains, it is also about landscapes and links between sites.

They have enormous potential to contribute to our knowledge of our history while giving us information that isn’t available from other sources. If archaeological resources need to be disturbed it is important they are adequately investigated and recorded first.

The entire Heritage Act protects heritage, but historical archaeological remains are additionally protected from being moved or excavated through the operation of the ‘relics’ provisions.

These protect unidentified ‘relics’ which may form part of the State’s environmental heritage, but which have not been listed on the State Heritage Register or protected by an Interim Heritage Order. An archaeological site is an area of land which is the location of one or more archaeological ‘relics’.

Built: These sites include buildings (both ruined and standing), engineering works and structures such as wells, mine shafts and bridges.

Movable: Machinery, tools, and household objects such as crockery, bottles, personal items and toys are all of archaeological value.

Landscapes: Pollen can provide evidence of past environments, parasites give us evidence of past human diet and disease and human skeletal remains can reveal details of early colonial occupation.

Maritime: Maritime Heritage sites in NSW can include shipwrecks, and their associated relics, shore-based and port-related facilities, human remains and any evidence of human interaction with the seas, lakes and rivers that can contribute to our knowledge and history of NSW.

In practice, an important historical archaeological site will be likely to contain a range of different elements as vestiges and remnants of the past.

Such sites will include ‘relics’ of significance in the form of deposits, artefacts, objects and usually also other material evidence from demolished buildings, works or former structures which provide evidence of prior occupations but may not be ‘relics’.

The value of the site and the elements within it must be assessed, documented and recognised so that correct future management choices are made.

Opened in 2017, as the Philip Ruddock Heritage Centre, the site has a display within a courtyard to view the remains, below street level interpretation, and a special artefact repository containing the significant collection recovered at the site.

The display showcases in situ remains, dating from the second penal settlement in NSW which are on display in the forecourt of the V by Crown building. There is well preserved and interpretable convict hut with a brick floor, the only one of its type so far identified in Australia. 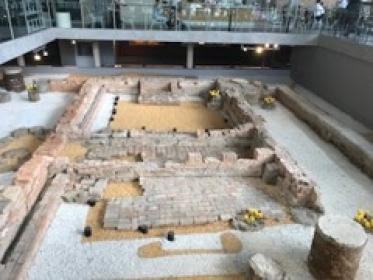 Archaeology in the courtyard

Adjacent to the hut is a blacksmith and wheel-wright’s workshop with evidence of molten slag layered over a sandstone flagged floor dating from the 1820s. On the allotment to the east is a cellar related to the Shepherd and Flock Hotel c.1823 with a timber lined floor and evidence of a fire. 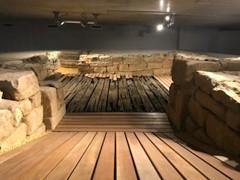 The hotel closed in 1870. Thus the V by Crown site represents many phases of the development of the site as it continued within the town with contributions by convicts, native born and free migrants in this transformation. 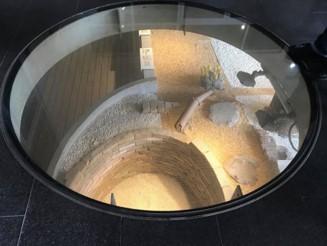 Government House is a significant site within the settlement of Port Macquarie, initially established as a place of secondary punishment for convicts in NSW in 1821.

It is a rare example of the official residence of the Commandant of a place of secondary punishment in Eastern Australia and of a local magistrate in a regional centre in 19th century New South Wales.

The house was both the symbol of authority and centre of administration at Port Macquarie in its evolution from penal settlement, to convict depot and free settlement, to self-governing local community

The archaeological remains were mostly well-preserved, including brick foundations and drainage associated with the early building, and a large cellar backfilled with demolition debris. The artefacts recovered related to the building and to the people who lived there with many artefacts found in fill deposits associated with the abandonment and demolition of the site in 1884-86.

Building materials from the site provide direct evidence of local brick-making, construction and other trades, and of decorative internal finishes such as cornices and plaster. Artefacts were typical of those found in domestic households and included items associated with clothing, grooming, health and hygiene. Finds included buttons, glass beads, an ivory mounted stud, fancy braces buckle, and a French-inspired snuff box made by Garrard.

Archaeology may be difficult to understand and value, unless you see it. Generating public outcomes from archaeological investigations is an important way to explain why these places are important and should be protected. The Heritage Council of NSW aims to ensure that when archaeology is undertaken in NSW it generates good public outcomes:

Public Open days are a great opportunity to give everyone a chance to visit and see these sites and learn how archaeology helps us to understand the past.

These are often required for large excavations in NSW as a result of new development.

Site interpretation is often included to explain the significance of the archaeological remains to the public.

Probably the most important part of the excavation process is preparing a final excavation report to document the findings. When completed, the reports are accessioned into the online library. Reports are available for free download from our catalogue, where available.

How is historical archaeological heritage identified and protected in NSW?

Significant archaeological sites in NSW are often found in historic settlements which were early centres of rural and urban occupation, unless they have been removed by later development. Many Colonial-era towns like Sydney, Parramatta and Windsor have seen a lot of change over 200 years.

Archaeological Management Plans and Zoning Plans exist in some parts of NSW to help identify places where significant archaeology may survive and to guide future management and development.

These towns include Parramatta, Sydney, Port Macquarie, Newcastle, Richmond, Goulburn, Bathurst, The Rocks and Millers Point, and Pyrmont. Other significant places could benefit from the preparation of these plans. Some Archaeological management plans also exist for specific sites.

Significant archaeological sites can also be listed on the State Heritage Register (SHR). This provides a greater level of protection and development controls. The aim of listing is to protect and conserve these important places for future generations.

About 50 sites are currently (2019) identified as ‘archaeological – terrestrial’ on the SHR, although there are others that have not yet been nominated for listing.  There are also Aboriginal archaeological sites listed on the SHR.

As well as listing on the SHR, archaeological relics are protected under the Heritage Act 1977. This means if you are excavating land in NSW and know or think you may disturb a relic, you should undertake an assessment and you may need to apply for an excavation permit.

This ensures that these important sites are excavated under proper supervision and that significant evidence of our past is recovered. Archaeological excavation is destructive, so any excavation program needs to be carefully managed.

Apart from excavating sites, other outcomes of assessment and development may be to retain archaeological remains in situ, unexcavated. This can be achieved in whole or in part. The best way to manage an archaeological site is often to leave it alone.

The Heritage Council of NSW has published policy and guidance about the management of historic archaeology for over 30 years. This includes an Historical Archaeology Code of Practice .

If you suspect you have found Aboriginal objects when conducting historical archaeology and do not have an Aboriginal Heritage Impact Permit (AHIP) work should stop. Read the Code of Practice for Archaeological Investigation of Aboriginal Objects publication for more information.

The heritage of NSW is irreplaceable. There are heavy penalties for offences under the Heritage Act 1977. Penalties may include fines, confiscation of relics, even imprisonment.

What you can do

Members of the public make a valuable contributions to archaeological research and site conservation. You can help by:

These publications can be downloaded for free: