Sinking of the HMAS Kuttabul

HMAS Kuttabul after the explosion. AWM012422

The HMAS Kuttabul had started life as a large passenger ferry, running between north and south Sydney prior to the opening of the Sydney Harbor Bridge. Like several other ferries it ceased to operate when the bridge opened. For a short time it was used as a showboat, and then in 1941, it was requisitioned by the navy to serve as accommodation for sailors in transit. It was permanently berthed at Garden Island. 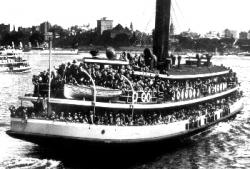 The HMAS Kuttabul was a show boat for a short time, courtesy National Parks Service

On the night of 31 May, there were more than 35 British, New Zealanders, Dutch and Australian sailors either asleep or lounging on its two passenger decks.

The lights at Garden Island had only just been extinguished at 12.30am on 1 June when the midget submarine M24 took aim at USS Chicago buoyed in Man-of-War Anchorage. The submarine was in position off Bradley’s Head, but the torpedoes missed their primary target.

The explosion created a massive hole in the ferry’s hull, near the stern. The initial impact thrust the vessel high into the air, whereupon it came crashing back and collapsed on the seabed. Twenty-one sailors died in the attack — 19 Australian and two British — and another ten were injured. 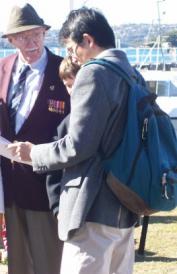 Eighteen-year-old Able Seaman Neil Roberts had a very lucky escape. He had been on sentry duty at ‘Kuttabul steps’ waiting for a sailor to relieve him. The sailor did not arrive so he went to wake him. By way of apology, the sailor offered Neil his hammock on the upper deck. When the explosion occurred Roberts found himself in the water, but somehow struggled to the surface. He was taken to hospital and has recounted his experience several times over the years.