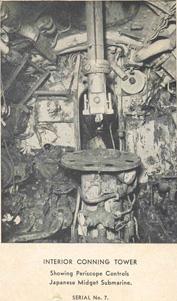 Postcard Serial no. 7 Interior conning tower showing periscope controls. This postcard is a souvenir of the exhibition of the Japanese midget submarines sunk in Sydney Harbour on the night of Sunday May 31st, 1942, the night that the first attack on Sydney by a foreign power took place and was frustrated. Courtesy Denis Gojak collection

Those parts of each submarine, which were relatively unscathed, were joined to form a composite submarine. The composite submarine was put on public display at Bennelong Park, behind Fort Macquarie (now the site of Sydney Opera House), in August 1942, attracting large crowds. Souvenirs from the midget submarines were also offered for sale, with all proceeds going to a naval charity. Today, many hundreds of these relics are retained by families across Australia. The composite submarine was then sent on a tour around New South Wales, Victoria and South Australia on the back of an Army lorry for fundraising purposes.

The submarine has been on public display at the Australian War Memorial in Canberra ever since. The conning tower of Ha-21, Lieutenant Matsuo’s submarine, is on display at the Naval Heritage Centre, Garden Island, Sydney. The portions of both submarines not used for the composite exhibit were apparently scrapped.