Lieutenant Keiu Matsuo was the most senior of all the submariners. He was born on 21 July 1917, the son of an elementary school master. Matsuo was an intelligent man and one of the first to graduate from the Kure Naval College. He was a passionate advocate of the midget submarines, and of the strategy of using them for surprise attacks on the enemy. Prior to the attack on Pearl Harbour, he went sent as a spy to Hawaii to gather intelligence.  After the midget attack failed, Matsuo was instrumental in overseeing modifications to the midget submarines.

In his last letter to his parents he referred to his fiancée, Toshiko: ‘I find it unbearable that I shall not see her again. She knows my feelings for her but I ask you to take care of her.’

Matsuo’s crewman was Petty Officer First Class Masao Tsuzuku. Tsuzuku had left school early and worked on a farm. He tried a couple of times to join the navy until he was successful. In his last letter to his brother he wrote:

'When you receive this letter you will know that I was killed in the Australian area on May 31. I have nothing to regret … Take care of my parents and my sister.'

Ban, the youngest of the midget submarine commanders, was regarded as a dashing dare-devil. He was the son of a highly decorated soldier and had passed the exams for both the naval and military academies. He was noted for his comment 'Nations that fear death will surely be destroyed. It is necessary for the youth of Japan to take notice of this. Sure to die is the spirit that will bring about the final victory'.

His crewman, Mamoru Ashibe was the third in a family of eight. Ashibe did not tell his parents about his mission and aboard the submarine wrote a letter to his mother asking her not to weep when she heard he had been killed.

The crew knew that their mission was dangerous, but they did not regard them as suicide missions. To all outward appearances the midget submarines would fulfill their mission and be picked up at a pre-arranged point. Food (soda biscuits, dried bonito, pickled plums, chocolate and caramels) and water, sufficient for a week, were provided for the crew members.

Nevertheless, the midget submariners knew that their chances of survival were slim.

Before their mission the crew cleaned their bodies with alcohol and sprayed perfume on their underclothes and donned new uniforms. 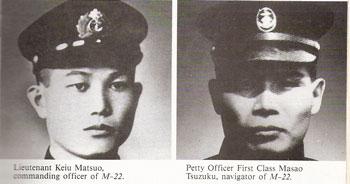 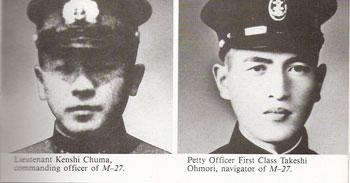