The Japanese started building midget submarines in secrecy in the 1930s. They were designed for stealth. They were transported on the rear deck of reconfigured, larger I class submarines. Once the midgets were close to their destination they were released submerged.

The submarines which attacked Sydney on the night of 31 May 1942 were a modified version of the Pearl Harbour midget submarines. They were Type ‘A Kai 1’ (improved version 1). They were 24 metres in length (80.5 feet); 46-7 tons and carried two 18 inch Type 97 special torpedoes, which were detonated by an inertia pistol linked to 350 kg of TNT.

A fuel mix of pressure enriched air, oxygen, kerosene and seawater was used to feed the engine to propel the torpedoes. Using this combination, instead of compressed air, meant that only one-fifth of the volume of gas was needed to drive the torpedoes. This left a much smaller trail of bubbles in their wake.

Compared to the Pearl Harbour midget submarines, the Sydney midget submarines had a slightly wider hull at 1.8 metres (6 feet), and were powered by 208 lead acid wet cell batteries (72 forward and 136 aft). 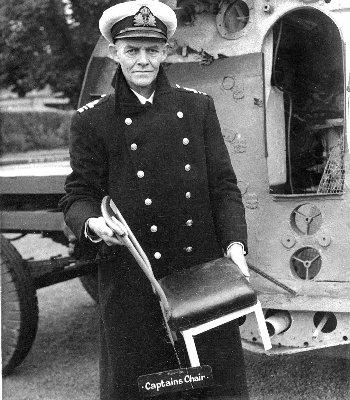 A small chair from one of the two recovered Japanese midget submarines, possibly from Lieutenant Kieu Matsuo’s craft. AWMPOO455.004

They also had an improved gyro compass, an all weather access hatch on the underside to permit enclosed crew transfers, while submerged; a slightly longer periscope at 2.4 metres (compared to 2.1 metres); new nose and propeller guards; the distinctive net cutters at the bow and atop the conning tower, and external torpedo caps with hydraulic ram releases.

Despite these improvements, the submarines were not easy to manoeuvre and had a wide turning circle.

They had a normal diving depth of up to 100 metres and a collapse depth of 200 metres.

Rules of engagement required the midget submarines to dive deep if they came under attack and to turn at right angles to their previous course.

The submarine’s batteries could not be recharged. They had a 600 horsepower engine, which delivered a reported surface speed of up to 24 knots, and 19 knots when submerged – a staggering performance for any submarine of the era.

The submarines could barely accommodate the two crew members, who were seated next to the periscope. Based on wartime records, it is thought that the submarines could remain submerged for about 12 hours in normal conditions. After that time, they would have to surface to replenish the crew’s air and stamina.

The first midget submarines built were referred to as Type A. From 1938, the Ourazaki and Kure naval yards in Japan turned out about fifty production ‘Type A’ midget submarines. They had their own numeric classification system, based on production sequences. In the Ha series they were numbered Ha-1, Ha-2 and so on.

The midget submarines could be carried on any of the large I class submarines, designed for that purpose, so their classification was often different to that of the submarine, which carried them to their destination.

The Japanese midget submarines were modified several times. Enhancements allowed later variants to accommodate additional crew, with an ability to recharge their batteries at sea.