In hindsight, Sydney Harbour's defences were both inadequate and largely ineffective against the Japanese midget submarine attack. Outside the harbour, there were six indicator loops on the ocean floor that stretched from the northern suburbs of Curl Curl to Dover Heights in the south. The loops, capable of detecting metal, recorded any movement in or out of the harbour. On the night of 31 May, four of the loops were out of service. 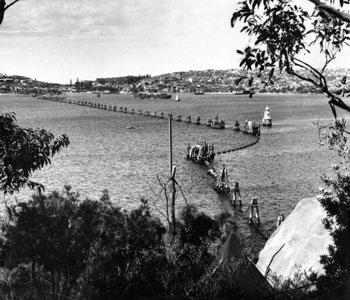 The boom net after completion, from the western side. The curved boom gate on the centre right of the picture had not been fitted when the events of 31 May 1942 took place. Lieutenant Chuman's midget submarine was tangled in the net opposite the pile light, seen here on the right side of the net

Finally, there was an incomplete anti-torpedo boom net across the harbour. The completed section was anchored to the harbour bed, and stretched from the southern shore of Green Point, near Watson’s Bay, across to Georges Head near Clifton Gardens.

Construction had commenced in January 1942, but the floating boom gates which were to open and close the channels, were not in place. This left two gaps of 275 metres on the eastern side and 293 metres on the western side.

On the harbour’s cliffs and headlands, there were gun batteries, anti-aircraft batteries and searchlights.