Sydney was expecting the worst in May 1942. Japan's devastating surprise attack against the United States at Pearl Harbour, on 7 December 1941, suddenly brought the war a lot closer to home.

Australia declared war on Japan immediately and then watched with growing anxiety as the Japanese took Rabaul, north-west of New Guinea, on 23 January 1942, and Singapore, on 15 February. Within days, Australia was under attack on its own soil. On 19 February, bombs rained down on Darwin. Further attacks were made on Broome and Wyndham on 3 March, and Katherine on 22 March.

Australians were understandably alarmed at the attack, and the possibility of an invasion. In the cities, there were air raid drills, wardens were patrolling the streets at night enforcing the 'brown out', and many commercial buildings and houses had sandbags for protection. There were gun emplacements and searchlights on cliffs and headlands all around Sydney. 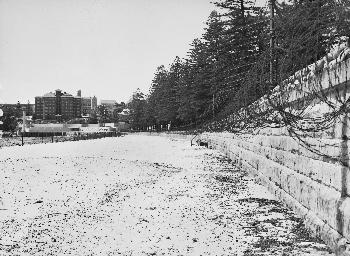 'We were given a special bag that contained various items like a peg to put on your nose and cotton wool to protect your ears against explosions.'

The Battle of the Coral Sea, 4 to 8 May 1942, provided a brief respite for the Australian community. Japanese naval forces, moving south to take Port Moresby in New Guinea were met by allied forces. While both sides suffered losses, the battle ended with Japan abandoning its immediate plans for Port Moresby.

Several of the combatants in the battle, the heavy cruiser the USS Chicago, its destroyer escort, the USS Perkins and the Australian cruiser, HMAS Canberra, headed to Sydney for repairs, and so were in Sydney Harbour on the night of 31 May 1942.