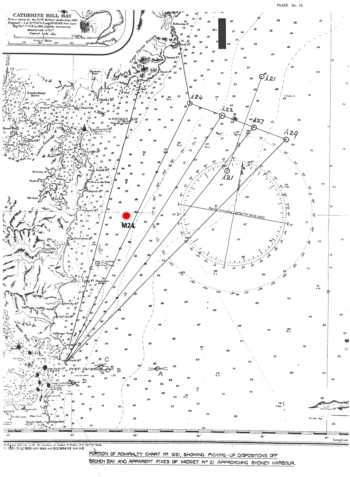 One of the great mysteries associated with the M24 is why the crew of the vessel turned north when they headed out of the harbour, instead of south to their rendezvous location with their mother submarines, off the Royal National Park.

Captain Sasaki, operational commander of the Sydney raid issued two telegraphic orders, concerning the recovery of the midget submarines: one on 26 May and one on 29 May. The first provided two key midget recovery locations: Day one was to be off Broken Bay and Day two was to be off Port Hacking. Recovered plans in fact identified five possible recovery locations along the coast.

The second order issued on 29 May altered the preferred recovery location to:

Depending upon the situation, some submarines may be ordered to search the foreshores after the second day.

When the Heritage Branch overlaid the M24 wreck site on the Day One recovery position, identified in the Telegraphic Order of 26 May, the vessel is almost exactly on the path to the planned rendezvous point with I-24 off Broken Bay, and over half-way along the voyage distance. 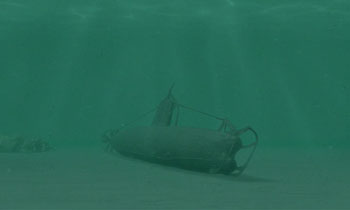 Tim Smith, M24 Project Manager, surmises that Sub-Lieutenant Ban may have decided not to lead any pursuing forces to the waiting submarine fleet to the south.

'Perhaps he hoped that the northern zone would be quieter; knowing they would have the southerly swell to assist their passage. They could then have signaled for a pick-up at a more agreeable time.

'They were found half way along this track so it is possible that after 13-14 hours in the submarine they would have been low on battery power, or possibly disabled from earlier combat in Sydney Harbour.

'They would have arrived at daybreak. Remaining on the surface would have made them vulnerable to pursuing forces so they would have been forced to submerge and sit on the seabed for at least another 12 hours until nightfall. We know that 12 hours submerged was really the limit of their air and stamina. It was an impossible scenario.' 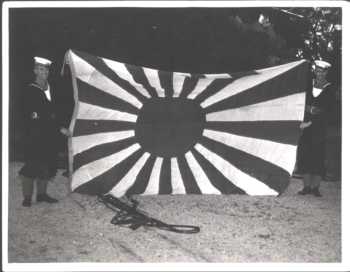 It is likely that the crew were weighing up several factors when they made their decision to turn north including:

There is no suggestion that the vessel had a fatal impact with the seabed. It appears to have come to rest on a level plane, so the options are that the crew chose to place it there, were battling an uncontrollable submarine or were incapacitated and could not prevent the sinking of the craft. 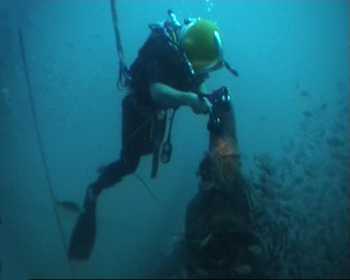 The scuttling charges are intact, but this could mean the crew was unable to ignite them, or again they were incapacitated.

The vessel is pointing in an easterly direction. This may well have been accidental, but it may also have been deliberate – the crew’s last desire to confront death facing the eternal rising sun?

It is tantalizing to think that Ban and Ashibe may have plotted their exit route from Sydney Harbour on their British Admiralty charts. It is unlikely, however, that such organic paper records have survived within the M24 wreck.