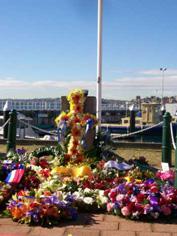 The events of 31 May, and 1 June 1942, have been movingly revisited several times over the years. Each year there is a formal naval memorial service to remember the sailors who died on board the HMAS Kuttabul at the Garden Island Naval Base (Fleet Base East).

In 1968, Mrs Matsue Matsuo, the mother of Lieutenant Kieu Matsuo visited Australia. She scattered cherry blossoms at the spot where her son’s submarine had sunk and visited the midget submarine at the Australian War Memorial. On her visit, Mrs Matsuo was presented with the sennimbari (belt of a thousand stitches), which Lieutenant Matsuo’s sister had presented to her brother before his mission.

Upon her return to Japan, Mrs Matsuo expressed her gratitude in the media for the honourable way her son had been treated.

On 6 August 2007, the Royal Australian Navy held two memorial services for the relatives of the midget submarine crews. The first took place at HMAS Kuttabul at Garden Island and was attended by relatives of the crew and the Chief of the Navy, Vice Admiral Russ Shalders and Commander Australian Fleet, Rear Admiral Nigel Coates, together with the Japanese Ambassador to Australia HE Mer Hideaki Ueda and the Japanese Defence Attaché, Captain Kazushige Nagai. It included a parade by 150 members of the Japanese Maritime Self Defence Force.

The second service took place aboard the HMAS Melbourne at the site of the M24. Mr Itsuo Ashibe, brother of Mamoru Ashibe, poured sake into the water at the wreck site to honour his brother. Family members were also able to take away a memento — some sand which had been collected from the site.