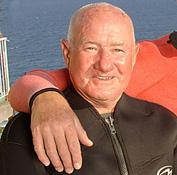 How did you find the wreck?

In mid 2006, we had been up diving on a wreck called Birchgrove Park (1956). On the way back, we had our sounders going, which we do all the time, and we ran over an anomaly on the seabed. Something was attracting a lot of fish. Now in this area we know for a fact that it’s all sand, so we knew there had to be something on the bottom. We marked it on our GPS and decided we would come back another time.

It was about 4 or 5 months time before we got back to it. On this particular day, Sunday 12 November 2006, we met down at Long Reef, and we decided to go and have a look at this place we saw a few months ago.

There were seven of us on two boats; myself and:

We motored up there, found the spot, through the anchors in, and all of us jumped over and went down and had a look at it.

What were your thoughts when you say the wreck for the first time?

The first thing I saw was this long cylindrical shape and I thought: what the hell is this? Then I swam towards the back of it and I saw the two propellers and I thought ‘crikey I know what this is — it can only be one thing’. Then I swam back and had a look underneath the nets and there was the conning tower sitting up and I knew straight away what it was.

You can imagine the comments and the exclamations when we all got back on the boat.

Was it a safe dive?

We have been diving deep wrecks like this for over twenty years. I’ve been doing it for over 25 years. Yes, it is beyond what most divers will do, but we dived it twice a day for a week.

We were working very hard too, because from the conning tower to the bow it was covered in about three to four big fishing trawl nets.

Had you been looking for the Japanese midget submarine?

Well, let’s just say we have a thing named ‘the habit’. If we find any anomaly on the bottom we go down and have a look at it. I think over 25 years I have always had in my mind that one of these could be this submarine.

The No Frills divers received Historic Shipwreck Awards signed by the NSW Minister for Planning (and Heritage) at the international OzTek diving conference, Sydney in 2007. The award recognised their success in solving an Australian maritime mystery.