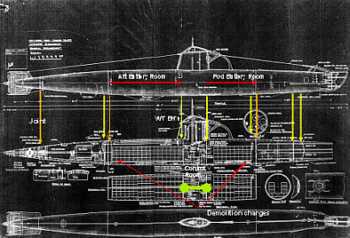 Possible location of demolition charges aboard M24, based on research by Tim Smith. Base image courtesy of Australian War Memorial AWM Series 54 505/6/7. Click on the image to view a larger image.

The submarine was found covered in commercial fishing nets, predominantly of post 1960s nylon construction. The vessel is lying upright on the seabed, with the bow slightly elevated and pointed towards the ocean (east). This is consistent with the greater weight of internal machinery and fittings aft, including the 136 batteries in the aft battery room.

Just under half of the submarine is buried in sand.

A rope has been snagged twice around the hull, around the manhole area, suggesting that the stern was once higher and the wreck may have settled, or alternatively, sand deposits have built up.

Several items are missing from the submarine, possibly from the impact of commercial fishing nets — most of the conning tower (or ‘fin’), the bow net cutting equipment, and the bow and propeller protective cages, the rudders, and the crew access shute.

The conning tower access hatch, conning tower net cutting mechanism, and upper torpedo tube were found in a debris field around the vessel.

The wreck lies half buried in sand and has been disturbed by commercial net trawling activity.

Fragments of curved steel plating were also found beneath the sand off the port side of the conning tower. This probably represents some of the missing conning tower 'skin' plating.

A wide area magnetometer survey is required to locate and isolate buried metal artefacts, which might remain beneath current sand levels.

The conning tower or ‘fin’ has experienced considerable damage. The entire external fairing has been removed. The access chute that once passed through the conning tower, forming the main crew entry into the pressure hull is gone.

The hull is substantially intact, although there has been significant localised corrosion, causing two large holes on either side of the vessel — immediately aft of the control room (conning tower) at the aft battery room. This has allowed water movement and sand scouring to occur and may have compromised the retention or context of relics inside this area.

It is in the hull that human remains are most likely to be found. All the evidence seems to point to the crew being on board the vessel. The two-step retractable access ladder, which is built into the forward face of the periscope well, allowing ingress and egress from the vessel, is still resting in its ‘up’ or stowed position within the upper crew access shute position. To exit the vessel, Ban and Ashibe would have had to pull the hinged ladder down to climb up and out of the control room.

The conning tower crew hatch was found alongside the hull on the port side. When examined, the locking lugs appear to be locked down (or partially down), suggesting that the hatch was closed when later torn off the wreck by fishing nets.,

The conning tower access hatch found in debris around the vessel

Given the obvious sensitivities, there has been no interference inside the hull to date. Archaeological sampling of the interior sediment deposits would only be carried out with the agreement of all parties.

The concentration of corrosion appears to have compromised the structural integrity of the vessel, making recovery risky. In fact, corrosion openings have effectively severed the hull behind the control room.

The conning tower net cutter found in debris around the vessel

The wreck's exterior has been colonised by a variety of marine life such as soft sponges and anemones, however the coverings are very light. Resident and visiting fish species, however, are particularly abundant in the aft battery room, making interpretation difficult.

Remains of M24's conning tower. View from bow, aft revealing the missing access chute creating an opening into the pressure hull at the control room

The view into the aft battery room reveal batteries stacked in their support frames (probably the top row of each stack of four seen here). There is also other machinery including ventilation fans, the air heating unit and cabling.

The forward casing, concealing the forward battery room and the torpedo room beyond is intact and there are no openings to allow visual access to check sand levels or internal condition.

Remains of M24's conning tower. View from bow, aft revealing the missing access chute creating an opening into the pressure hull at the control room

Back aft, the motor room, which houses the 600 horsepower electric motor, is intact. There are minor corrosion openings in the roof line, forward of the aft manhole. The aft manhole once gave limited access into the motor room. Through these openings it is possible to see that the room is filled with sand.

The bow has sustained critical damage, probably from constant fouling by fishing nets.

Both torpedo tubes are empty confirming that this submarine is M24. The lower torpedo tube is intact throughout its length, however, only 2.4 metres of the original 5.4 metres long upper torpedo tube remains. Part of it was found buried in sand off the bow's port quarter.

The distinctive protective bow cage, fitted to protect the tubes, and the forward net cutter, have been removed. These were some of the improvements added to the vessel type post Pearl Harbour.

Despite the damage, there is little evidence that the bow had any major impact with the seabed. Indeed, the presence of the lower torpedo tube in its original alignment suggests that the submarine settled onto the seabed in a controlled manner. 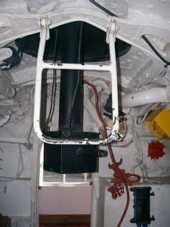 There is no evidence that these demolition charges were fired. Archaeological surveys have confirmed that the canister which contains the aft charge would now be buried within anaerobic sand deposits, and this may have prolonged its integrity. The state of the other forward charge is unknown since it lies concealed in the forward torpedo room, which is inaccessible.

This unexploded ordnance represents an ongoing issue for all decision-making concerning survey work on the wreck, and public access. Detailed ongoing risk management modelling is being conducted by the Heritage Branch.

Both contra rotating propellers are intact, although only two blades of each are visible above the sediment. Ropes trapped around the screws, once attached to fishing nets, are evidence of past contact with fishing nets. These are presumed responsible for the removal of most of the exposed elements at the stern. A number of substantial nets are still entrapped at the bow, confirming their destructive power. Efforts to remove them have so far proved difficult.

View into upper torpedo tube where torn from bulkhead